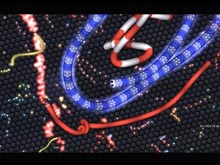 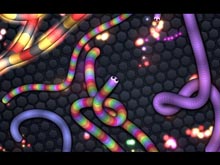 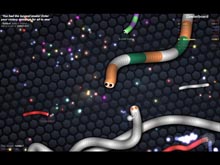 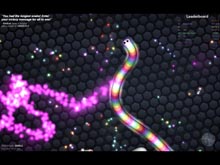 Game Description
Players control an avatar that looks like a worm that eats colorful pellets to grow in size. Pellets appear on the map in the game both in a natural way, and from other players who died. The goal of the game is to grow the largest and longest worm in the game by eating pellets and defeating and consuming other players to gain mass. As soon as the player starts the game and appears in the virtual world, his avatar is constantly moving forward. If the player’s worm head collides with part of another worm, the player will die. The body of the defeated avatar turns into bright, glowing pellets for eating by other players. After death, exactly as many pellets will appear as correspond to the mass of the worm. These pellets, which remain from the death of the avatar, will match to the color of the avatar itself, and they will be brighter and larger than the normal pellets that naturally appear around the world. Ordinary pellets do not produce as much mass as pellets left over from other worms.
Categories
Kids Top Down Arcade Action
Attention
All rights to the computer, mobile or video game presented in this section belong exclusively to its legal copyright holders. This website does not distribute illegal copies of the game and does not have links to websites with illegal copies of the game. All information about the game is provided for informational purposes only.